The Upright Citizens Brigade Theatre is excited to announce the three New York Artistic Directors who will lead the reopening of UCB New York in 2023. Please join us in welcoming Iliana Inocencio, Laura Canty-Samuel, and Michael Hartney

While we continue our search for a permanent theatre and training center space in New York, we’re excited to begin in-person classes in January 2023 at a temporary location in SoHo! We will begin programming at an interim theatre this spring. More details to come!

These new Artistic Directors have an exciting vision for what’s ahead and are looking forward to working closely with the amazing NYC comedy community in their mission!

Iliana Inocencio is an actor, writer, acting coach, and director. Her musical sketch comedy group, AzN PoP! was the first all Asian American team to have a long running show at UCB. She also performed on Maude Night with teams, Presley and Peach. Favorite TV credits include: Orange is the New Black, The Other Two, and The Iliza Shlesinger Sketch Show. She’s very excited to help usher in the new UCB and has big ideas for the community!

Laura Canty-Samuel is a writer, comedian, and alumni of UCB where she was a member of the UCBTNY house sketch team The Foundation. She is currently a writer for a number of animated and live action series with Sesame Workshop as well as head writer for two exciting projects being produced by Holler Tech. Oh, and she was just nominated for two writing Emmys, so there’s that.

Michael Hartney is an alum of Harold, Lloyd, and Maude Night and co-created Characters Welcome. He previously served as the Artistic Director of UCBTNY from 2018 to 2020. He is the head writer at Brooklyn production company Hatched and is a co-founder of Squirrel Comedy Theatre. His Emmy nomination count remains steady at zero. 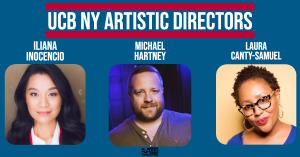