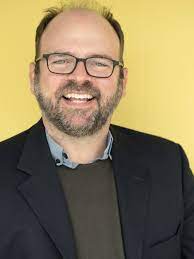 Joel has been performing long form improv and sketch comedy at UCBTLA since 2005. He's a member of the house teams Sentimental Lady and Toledo Rep. He's also appeared in ASSSSCAT, Soundtrack, America's Best Comic, Quick and Funny Musicals, Dirtiest Sketch Contest, Cleanest Sketch (winner!), Gallery Of Evil, Fucked Up and Illegal Videos, and Freak Dance at UCBTLA. He studied improv under Matt Besser, Ian Roberts, Matt Walsh, Seth Morris and many others. Joel grew up in San Antonio, TX and went to S.M.U. in Dallas where he received a B.F.A. in Acting. In 1995 he joined Theatre de la Jeune Lune and for the next five years performed in over 20 productions. From 2000-01, Joel studied at l'Ecole Philippe Gaulier in London, England. He's had recurring roles on HBO's The Brink and ABC's Fresh Off The Boat. He was a series regular in the Nickelodeon pilot Back Of The Class. He had a recurring role as James Van Der Beek's agent Donnie Jarvis on ABC's Don't Trust The B---- In Apt 23 and a recurring role as Detective Hodges on The Good Guys on FOX. He has also appeared on Key & Peele, Newsreaders, Modern Family, How I Met Your Mother, Big Love, Reno 911, My Name Is Earl, and Burn Notice. He appeared in such features as Freak Dance, Killing the Dream (Best Film - 2004 Temecula Film Festival) and Alleyball (Best Feature - SoCal Film Festival 2006). In 2013 co-directed two shorts - one of which, Justin and Heather, was accepted into the Downtown Independent Film Festival Los Angeles. Most recently Joel has been seen on USA's Pearson, as Hal Carpet on Lifetime's American Princess and had recurring roles as Mr Chandler on the Paramount Channel's Heathers, Matt on HBO's Big Little Lies and Joel in ABC's digital series, Boondoggle. You can follow him on Twitter @joelaspence.