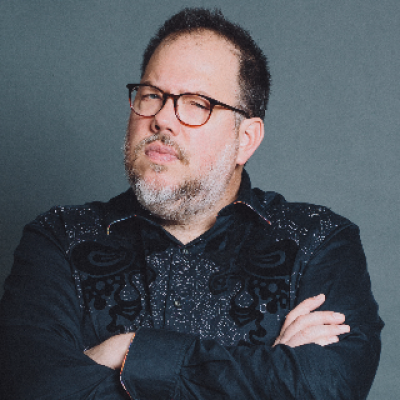 Acerbic comedian Sean Conroy is self-lacerating and constantly annoyed- at himself and everybody else- but always manages to sneak in a healthy dose of silliness and joyful charm. Splitsider.com describes him as “intimidatingly smart, intimidatingly funny, and just plain intimidating.”

He’s a multi-disciplined comedy tour-de-force. As a stand-up, Sean’s performed on Conan and Comedy Central. As an improviser, he was a founding member of the first ever house team at The Upright Citizens Brigade Theater, legendary improv group The Swarm, and has been a regular in the UCB’s flagship show ASSSSCAT for almost twenty years (in fact they asked him to perform with them when they recorded their live show for Shout Factory, still available on DVD).  He’s been a television writer for over a decade (Key & Peele, Crossballs, Dog Bites Man, Gentlemen Lobsters, Players, Love Inc.), most recently finishing up his third season as head writer of Adult Swim’s cult favorite Mr. Pickles, about a dog who’s sort of like Lassie (except he worships Satan, and is a serial killer). He’s hosted over 325 episodes of his podcast, The Long Shot (which the AV Club calls “rollicking” and “a consistent delight”).